Japanese Dramas and Movies, My Opinion February 20, 2015 Leave a comment

Itazura na Kiss 2 ~ Love in TOKYO did not air last week for some reason that I did not bother to search up and instead was aired this week. Despite everything happening accordingly to its original source material, I feel like the drama is moving along at a very slow pace. It just dawdles along, making very slow movements each ep. In saying so, this ep actually walked along faster than its usual pace and was quite engaging compared to the previous few eps. There was more that came out of Naoki and Kotoko’s relationship and there was a setback which will either bring them closer together or pull them apart.

The drama would work so much better if there was more of these eps allowing Naoki and Kotoko to work on their relationship while building on their understanding of one another rather than throwing in obstacles and forcing the couple to jump through them together but without understanding each other more in the process. I quite like this ep for those feelings between Naoki and Kotoko. Naoki dropped the shocking announcing that he will be moving away, far away for work purposes and that totally smashes Kotoko’s heart. He is her everything so how can she bear to part with him for even a moment? Seeing her all depressed and heartbroken, this leaves Naoki with no choice but to decide to take her along as well. Knowing that she will have to be separated from her hubby,  this only made Kotoko more determined to become a nurse and be someone worthy of him which is why Naoki didn’t tell her of his plans to bring her over too. I like this in their relationship where they come to a better understanding of each other without being forced to do so.

Is it possible that the couple lost their chemisty this season because they don’t seem to have that fire between them any more which was quite evident between them in the first season. Or maybe it is because the two now have a different type of relationship which has ultimately changed the chemistry between them. Nonetheless, the strong chemistry that they once had is no longer here and it’s such a shame because it is what is needed to make a couple strong. Without chemistry you are just left with watching a boring and bland couple. 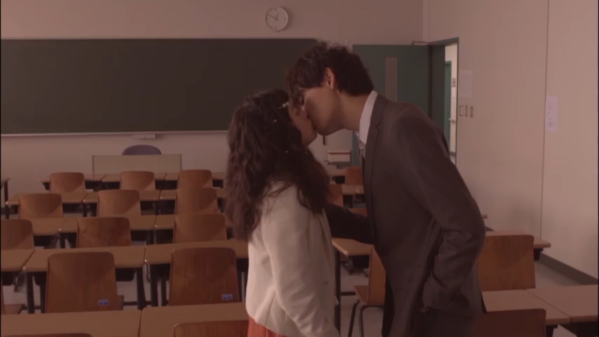 I find Naoki and Kotoko’s relationship to still be quite cold even though this ep they have progressively gotten warmer with one another. And it’s still “kisses solve everything” for them. They face the same obstacles that the other couples from the other adaptations had to face but somehow it doesn’t quite bring them closer together. The problem lies with Yuki Furukawa who is stripping the warmth out of Naoki. He is just putting in too much to portray Naoki as the smart and handsome guy who everyone envies that he forgets that Naoki is also a hubby to Kotoko and that’s the problem in their relationship.

This ep was really all about Yuki Irie (Yuga Aizawa)’s budding romance with fellow schoolmate Yoshimi Sagawa (Ayu Matsuura). It’s actually pretty cute to see Yuki run into the same romance path as his older brother and how he is falling for the exactly same type of girl that his older brother also fell in love with. He might actually be even cooler than his brother, lol, especially with that face of his and his seriousness in tutoring Yoshimi. Yoshimi might be far far from him academic-wise but she is not going to let that stop her from chasing after he. She is determined heart and so far it looks like she is reaching it. For Kotoko, see Yoshimi is like seeing herself back in those days when she was was crushing over Naoki, someone who she never thought she would even be able to talk to let alone spend the rest of her life with which is why she is excited to help her win over Yuki’s heart. They share a bond that no other can understand and I love how keen Kotoko is to helping her out. She really sees herself in Yoshimi and just the way Yoshimi and Yuki’s relationship is unfolding is exactly like how her and Naoki’s relationship came about.

I hope next week’s ep will be a better ep. I remember catching the same part in They Kiss Again and it was adorable there so hopefully this will be the same for Naoki and Kotoko. I really want to see some substance and something solid between the couple. This season is supposed to be about to be about them and them getting closer and closer with each other and falling with each other more and more but so far it has not quite touched on this basis yet which is such a shame.