My Opinion on Love Cheque Charge

My Opinion, Taiwanese Dramas and Movies February 24, 2015 Leave a comment 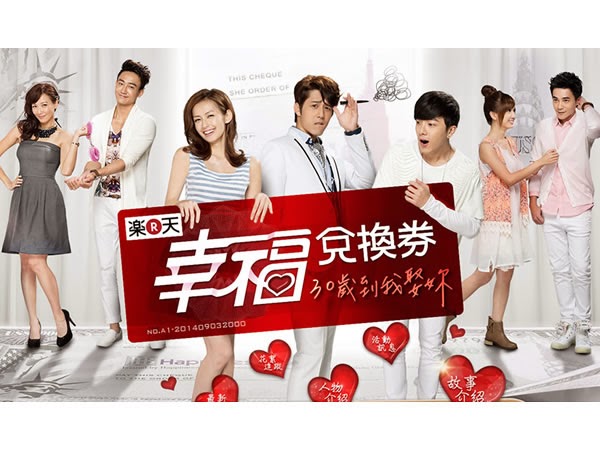 I finally finished SETTV daily Love Cheque Charge from last year! It only took me five-ish months but I finished it at last. I might have taken on more than I could have chewed with this 74-ep drama but despite all the new stepping stones in my life, I somehow managed to finish it. While it’s nothing outstanding, it was definitely a drama that I found worth watching for its hearty story-telling even though at times it didn’t make any sense. There was tears, jealousy and heartache but more than that, it was filled with all sorts of love and that was made made it such a fun drama to watch.

LCC is your typical rom-com dramas but it tried to stand out by incorporating in a fantasy element which worked in as many ways as it didn’t work. It skimmed on skimming on fantasy elements but it barely just skimmed it that it didn’t out quite as touch those fantasy elements as much as I would have liked to see. But for the majority it was a nicely rounded daily drama and for me that made it a fun drama to watch. I quite enjoyed most of the characters and the way their relationships were written.

The one thing that caught my eye when I first heard about LCC was that Jay Shih and Smile Wen would be playing lovers after their nearly-lovers pairing in In A Good Way as Zheng Ren Wei and Bai Xue Fen “Bai Xue”. The so-called movie for IAGW is not going to see daylight any time soon so obviously this was a calling for me to watch LLC for them and that’s exactly what I did, at least partially so. For the first few eps I watched explicitly only for them, fast-forwarding scenes that did not contain them but the more I watched of the drama, the more I also fell for the other couples and suddenly I was no longer just watching for Jay and Smile but instead for the entire cast and drama. The drama started to win over my heart and that’s a very good feeling to have a drama win me over when I didn’t even intend to fully watch it.

One thing that this drama really excelled at was with relationship development. I think there was adequate development for each of the three main couples to create three heartfelt relationships to the same degree and I really appreciate that because it allows you to connect with each of the couples one way or another. While He Bu Fan (George Hu) and Xu Man Man (Phoebe Yuan) was the central couple, Wang Bai Hao “Ma Tong” (Jay) and Tian Xin Ping (Smile) and He Guai Yu “Mao Guai” (Jet Chao) and Wang Qian Qian “Qian Qian” (Jessie Chang) were also given their own spotlight as was Shi Bo Hai (Xie Kun Da). Additionally, I also loved how other familial relationships where also given their own spotlight which was nice and I really like how the parents all played some very important roles here. 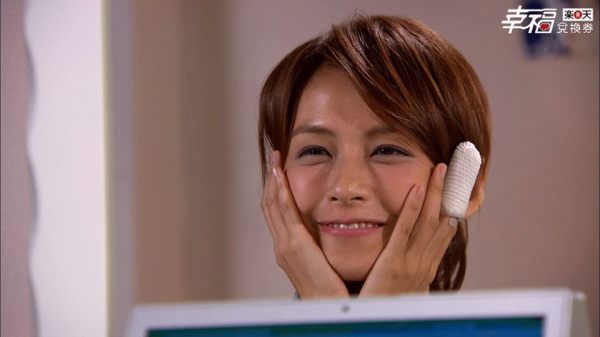 *Phoebe strained her middle finger which is why you see it bandaged up for the entire duration of the drama.

Phoebe was such a joy to watch. She is the standout performance from the entire drama. She has improved leaps and bounds since I last saw her in King Flower (AKA Substitute Princess). She was so-so at the start but once the story started to find its place, she got more into character and her acting steadily improved. She is quite natural as Man Man and I love her down-to-earth persona. She has definitely grown more and more comfortable with her co-stars which can evidently be seen through subsequent eps and I really enjoyed watching Man Man come to life. Phoebe did a an amazing job leading a drama and she was excellent in bringing out the character of Man Man.

I’m not sure how well Kun Da’s ghostly cupid role worked with the storyline. I would have preferred to see him play ghost cupid for the entire duration of the drama rather than have him come back alive which just defeats the purpose of the fantasy element. He also disappeared for a good 13 eps and then came back as his human self. He loves Man Man dearly (and still does) but all he wants is for her to be happy which is why he chose to set her free without telling her the reason why he did so. As a ghost, he could only watch her from above while helping her to see what her true happiness is. Seeing her fall for Bu Fan and the happiness that it brings her, he can only help her to chase after her happiness while secretly protecting her and shielding her from the dangers.

I grew to quite like Bu Fan and Man Man as a couple even though I didn’t quite care about them at the start. They are quite the opposites but that is what makes them so right for one another. He is smart and fast while she is slow and steady and but I love how their polar personalities makes them perfect for one another. Man Man was first to show her interest to Bu Fan and she wasn’t afraid to chase after it. Bu Fan kept denying his feelings for her but eventually he realised that he had fallen for her. I love how they see the flaws in each other but choose to embrace those flaws. They’re not perfect but their imperfections complement each other well which makes them perfect for each other.

Man Man is very different to Bu Fan’s ex-girlfriend Sun Wei Ya “Victoria” (Lene Lai). Man Man is vulnerable and open to attacks which is why Bu Fan sees the need to always protect her at whatever the cost, even if it means that he has to leave her and break her heart. He wants her to be happy but more than that, he wants her to be safe.Fate said they weren’t meant to be together but they challenged fate and together along with Bo Hai’s help they triumphed fate. It require some noble idiocy along they way but in the end it was their love for one another that was more important than anything else to them. 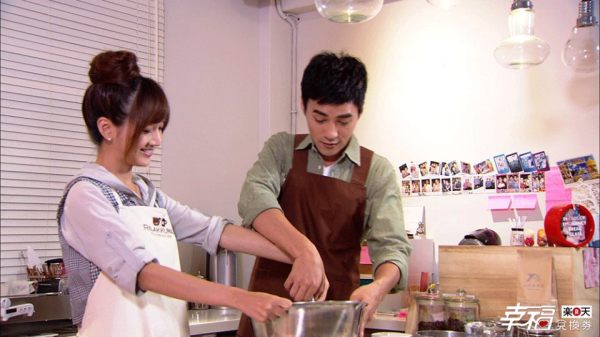 The reason why I got into this drama was for Jay and Smile. Their love story was cute but rather thin. It was love-at-first-sight for Ma Tong who fell in love with Xin Ping the very moment they locked eyes together. And that was how their relationship began. She is like the angel who dropped into his small world. Ma Tong was a very introverted guy who stayed home all day playing computer games and was locked out from the outside world. That was until he met Xin Ping who completely changed his life, showing him what it means to be in love and slowly opening his world up. She gave him a makeover both internally and externally and that showed him another side of himself which he never knew even existed. He was there all the time supporting Xin Ping even when she was going through a really tough phase in her life and his persistence to pursue after her soon won her over. Ma Tong is just the sweet and tentative guy who Xin Ping needs to complete her life. Ma Tong and Xin Ping remind me very much of Ren Wei and Bai Xue but I wouldn’t have any idea because I was basically in this hoping to see a Ren Wei and Bai Xue love story.

Mao Guai and Qian Qian had a flash marriage, so fast that they barely got to know one another’s name before they decided to make things official. With that comes misunderstandings and that is what gave Mao Guai a big mess to clean up with Lei Bei Zhi “Rebecca” (Cherry Hsia) complicating their relationship. Rebecca is one craaaazy girl which intentional plans to get close with Mao Guai the night they met. Not only that but she is not afraid to blackmail him when clearly his heart with with Qian Qian and Qian QIan only. She even goes all stalker-mode and moves right next door to him. She weakened the trust betwwen Mao Guai and Qian Qian but in the end it only made them stronger as a couple and Rebecca was just a mean of allowing Mao Guai and Qian Qian to understand each other more and love each other more. I really like Qian Qian. She is one a strong-willed woman but she is willing to everything give it all to be in love. She chose to forgive and endure through Mao Guai’s mistake because she loves him. And love was what made them stronger as a couple. 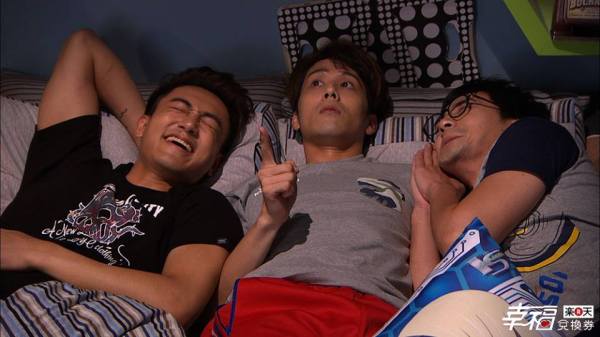 I really enjoyed the various bromances here whether it was between Bu Fan and Bo Hai, Bu Fan and Mao Guai or Mao Guai and Ma Tong. I especially enjoyed watching Bu Fan and Bo Hai’s bromance. Bo Hai’s only friend was Bu Fan while Bu Fan initially refused to give into Bo Hai’s friendship. But being the only one who could see the ghost Bo Hai and the constant abrupt appearances by Bo Hai, this lead them to form a friendship and it was one that both of them will cherish forever.

I like it when dramas work alongside a subtle timeline but when you work alongside a solid timeline you have to do it right or at least make it seem reasonable, something that LCC did poorly at. By the timeline, everything occurred wayyyy wayyyy wayyyy too quickly and I think the drama would have faired better without a timeline in place because the timeline just puts the drama in retrospective and it was one that was not well-timed. Rebecca was already three-months pregnant when Bu Fan and Man Man were walking down the aisle which means they chose to walk down the aisle barely one-and-a-half months of dating. Rebecca didn’t even have her stomach show yet by the time Bu Fan was ready to wed for the third time which means she couldn’t be more than six months pregnant. So in those short few months, A LOT happened and it happened way too quickly. I know, I know, I am over-analysing this otherwise innocent drama but when you have a timeline you have to at least be realistic with it or else it really throws the drama out of balance.

In terms of story-telling, I found that LCC was there but not quite. I really enjoyed the style of writing and how it was translated on-screen. All was good until the end when it started to derail and get draggy, dragging out the misunderstandings for as long as possible and that became a pain to watch. Luckily this wasn’t the case for all of the couples which would have made watching very boring.

Love Cheque Charge is a fun daily to watch and with very detailed writing and nice cinematography to boot. It’s always such fun to watch dramas that is light and fluffy which is exactly what LCC is all about. I think the reason why I didn’t enjoy it as much as a I could have was because I left on hiatus for a period before getting back to it but otherwise, I really enjoyed it.