It was only a few days ago when news exploded of Beatrice Fang being pregnant with fellow actor boyfriend Yang Ming Wei‘s boyfriend and while they spoke of getting married soon, “soon” came faster than I could even blink my eyes. News of their pregnancy was supposed to come after wrapping up their current drama Dear Mom but it came out earlier than they had expected, much like their marriage and pregnancy. Those who have been watching Dear Mom have been noticing with steady eyes of Beatrice weight gain and the drama even wrote a pregnancy storyline for her character but who would have thought she’d be pregnant in real life.

Pregnancy before marriage is much more widely accepted in this 21st century, but it is still quite a taboo in the eastern world and the Chinese community in particular is not that open to this yet. Marriage was in the impending future for Beatrice and Ming Wei and falling pregnant only pushed it forth for them. Ming Wei pulled Beatrice out of bed and proposed to her with a diamond ring hand which she had no reason to say no to. They registered their marriage papers with Fall in Love with Me and Dear Mom co-star Jack Li as their witness. They will be holding their marriage ceremony tomorrow and the wedding banquet after giving birth. Congrats to the newlyweds and their pregnancy!

It’s such a weird coincidence how Beatrice’s real life best friend Hannah Quinlivan also happens to be pregnant, and also at the same stage at that. Beatrice was Hannah’s maid-of-honour at her January wedding in England, and Hannah already knew of Beatrice’s pregnancy back then. They are going to be such wonderful mothers and their children will definitely be the best of friends! 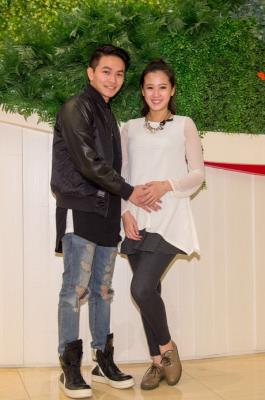