My Opinion on The Lost Tomb: First Impressions

If you are looking for an action-packed drama then The Lost Tomb would be the one for you. It is action-packed right from the beginning, in fact the action starts from the very first second! The Lost Tomb is described as a cross between Harry Potter and Game of Thrones featuring elements of the supernatural, action and adventure. TLT is a web-drama adapted from the insanely popular internet novel Grave Robbers’ Chronicles written by Kennedy Xu. It is said that this novel created a craze in China for novels focusing on grave-robbing that also deals with supernatural elements. The drama version will have eight instalments filmed over a period of eight years. Unlike the typical C-drama length, each instalment of TLC will only have around 12 eps, two of which were the prologue, which puts it up for greater action and more promising developments.

Like most novel-to-drama adaptations, the adaptation is not perfect and the drama would usually tweak the plot to have it better suit the television centre. TLT was of no exception; there are minor changes to the plot and another major deviation from the novel is the addition of new characters. Otherwise, TLT should be very similar to the novel.

Going into TLT I did not expect to see what I saw. TLT really started with a bang, drawing in my attention and keeping me glued to see what all the action was about. TLT started off with Wu Xie (Li Yi Feng) going on an adventure-ride after returning to home soil from studying abroad with his best friend High Shao (Leon Lee) to protect… a bull’s head. Their adventure consisted of them being chased across the desert like they were fugitives, gaining a new friend to join them for the ride, setting their car on fire and at the last moment meeting Zhang Qi Ling “Kylin” (Yang Yang) who saved their butts. Little did they know that what they were being chased for was not the bull’s head but the cloth that was used to wrap around the bull’s head. Inside the cloth is one-half of an ancient manuscript, which is the igniter to the grave-robbing adventure that ensues. This leads Wu Xie to meet Chen Cheng Cheng (Sun Yao Qi) and they quickly befriend one another. Cheng Cheng has the second-half of the manuscript and now with more knowledge to the manuscript, this gives them direction of where to head and without needing any persuasion, Wu Xie was packed and ready to go on this adventure. That is, after he assembled himself his entourage. He might be ready to go on this one-on-one but he knows that he will not be able to do so without some help.

Wu Xie is an antique shop owner coming from a family of tomb raiders. His parents died when he was young and the only family member he has remaining is his third uncle, Wu San Xing (Ken Chang). He has a strong interest for antiques, especially that concerning tombs and jumps at opportunities that will lead him future on this conquest. In saying so, he is a guy who plans his moves with strategy. Although they might not necessarily be the best moves but he does think before he moves and when he moves, he moves with a powerful fire inside him. I also like how his personality is coming together. He really knows how to play with people’s mind and uses this to his advantage, especially using it to persuade his uncle to partake on this journey with him.

Kylin is a very mysterious character who always seems to make his appearance during Wu Xie’s most needy times. He doesn’t talk much but when he does, he exerts this authority to him that everyone respects. They don’t doubt him but has their full trust in him. He must have some sort of power in him. I am really intrigued by him and the mysteriousness that surrounds him. Heard that there’s some interesting bromance that goes on between him and Wu Xie later on in the novel, i.e. later on in the drama, so that would be interesting to see. 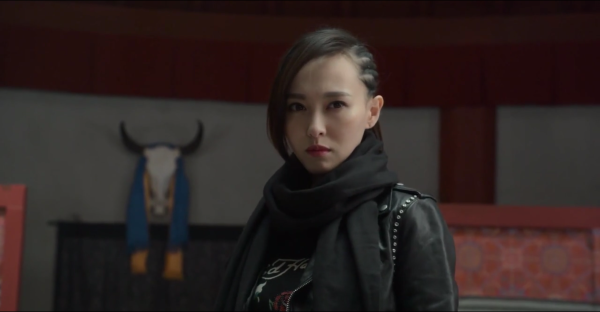 I am loving Ah Ning (Tiffany Tang) who can really kick people’s asses! So far her only appearance has been in ep one but she has sure made an impact. She is fierce and full of fire. She isn’t afraid to face up to her opponents when she has to. And she will kick their asses too! So far, she hasn’t made much of an appearance but she appearance that she did make was a brilliant one. I really like how calm she is despite her kick-ass appearance. She has this assertive authority to her that doesn’t come across as powering and rather, it makes quite a likeable character who without a doubt will get to shine more once she steps foot alongside Wu Xie to go raid the tomb.

I quite like the story development. It kicks right into the core of what the drama is all about and then backtracks to introduce to us the characters and the story behind all of this action. It’s some neat writing because the action lures us in and then keeps us glued as we get to know more to our characters and why they do what they do. I also quite like how the different relationships are coming together with the various friendships and how everyone is bonded together due to this conquest. There were characters introduced in the prologue who have yet to make their reappearance but when they do but they will definitely reappear with a bang especially considering how action-packed this drama is. I also love how there is humour incorporated in such a way that is subtle but noticeable enough.

The cinematography is brilliant! It’s very nicely filmed and very crisp to look at. The production company really went to great measures to score such pretty landscapes, with the desert and mountain landscapes. Shooting of the drama including scenes from Beijing and Tibet. The CGI, however, is a bit rough but is still nonetheless works visually well with the real life filming.

I am quite enjoying the journey that is TLT, which is full of action and takes on an adventure right from the very first second. TLT moves very fast and I quite like that. It’s nicely written and paired with some visually appealing elements, landscape and Li Yi Feng alike, hehe! I like this adventure and am more than ready to see the events unfold.

10 thoughts on “My Opinion on The Lost Tomb: First Impressions”